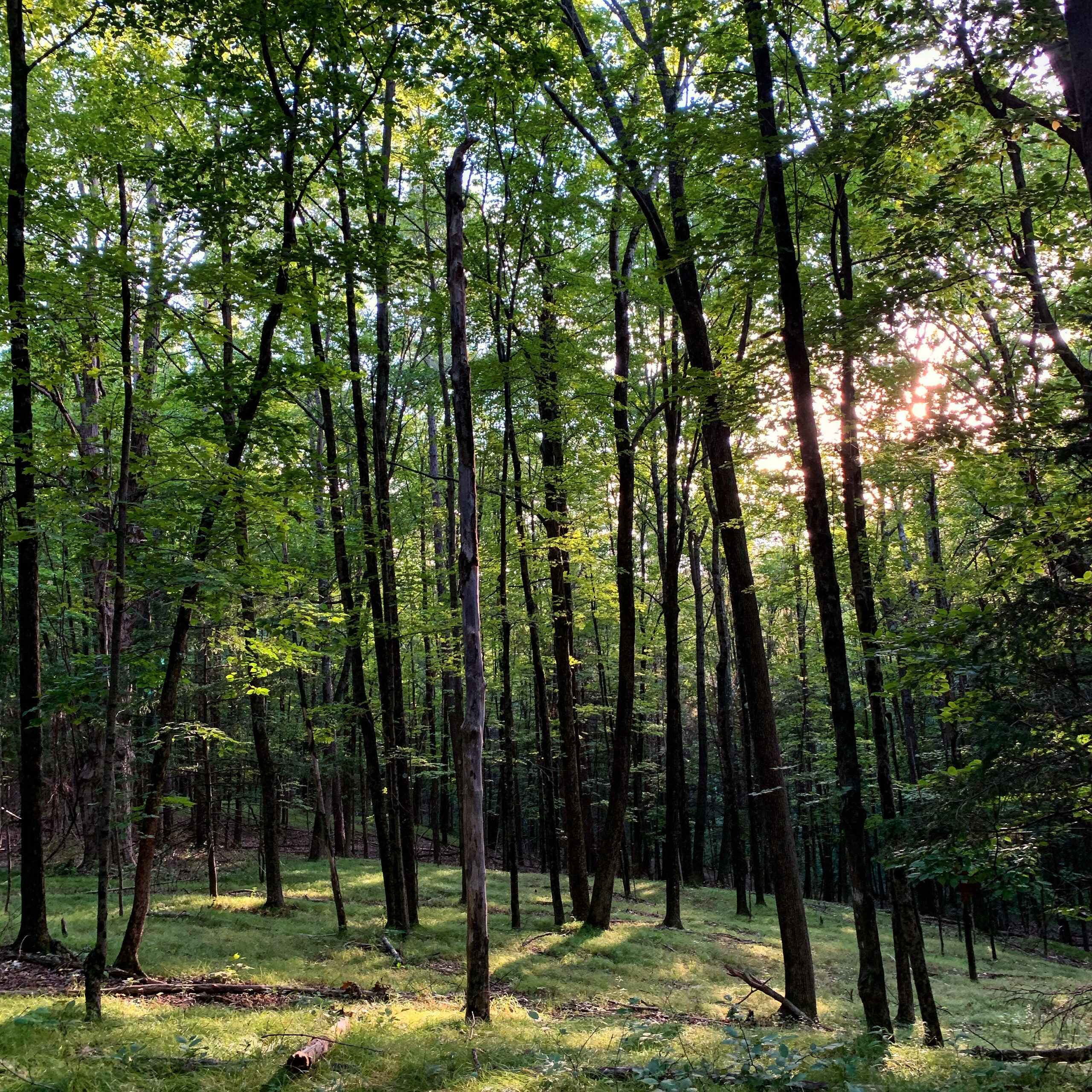 “Don’t move.” My husband, Floren, draws up beside me, so close I can feel the sleeve of his T-shirt brush against my skin. “Look up,” he whispers, and I turn my gaze slowly from the hiking boot laces I’m adjusting to the woods in front of me. A doe, lithe and glossy-furred, stands less than fifty feet away, obsidian eyes trained on me, black nose twitching with curiosity.

Our close encounter of the natural kind lasts for just a few seconds, but there are more to come here in Hand Hollow, one of the Columbia Land Conservancy’s ten conservation areas. We’ve hiked some of the country’s most spectacular trails, including on Mount Rainier in Washington and the Nāpali Coast of Kauai, but I keep coming back to the CLC’s preserves. They’re convenient to home, to be sure. But more than that, each CLC conservation area has its own distinct personality and sense of place.

Hand Hollow in New Lebanon, all close, dense vegetation, marshes, and ponds, is a magnet for beavers and otters, not to mention numerous birds, from diminutive finches to robust wild turkeys. (Humans also enjoy the water; kayaking and paddling are popular here.) There are plenty of small mammals, too, like chipmunks and red squirrels, who chitter warning calls to one another as we pass. The forest is exceptionally quiet, thanks to its tucked-away location and the soft beds of pine needles that silence our footfalls. With its earthy smells and humidity, and the animated conversation between wildlife species, Hand Hollow has the feeling of a secret upstate bayou.

Where Hand Hollow is marshy, Borden’s Pond in Ghent gives the impression of an enchanted forest. Along the gently inclined loop trail, a small stream trickles in a soothing rhythm. When the early-morning sun angles through the trees, parts of the path are illuminated in shafts of diffuse light. In a few spots, the trees open up onto glimpses of the Catskill Mountains glowering in the distance. On any given day when we’ve visited, we’ve had this underrated preserve almost entirely to ourselves.

Ooms in Chatham is an easy amble over sunny loop trails with striking hillside and water views. Strolling its paths, with the profusion of dragonflies, bees, butterflies, and other pollinators that seem to follow along, feels a bit like walking through an animated Disney movie. The large pond is an excellent choice for paddling and fishing, as well as snapping photos of green frogs that camouflage themselves in the sweet flag growing around the edges of the water. It’s not unusual here to see a chipmunk suspended upside-down on a tree trunk, observing the passage of human visitors. One of my favorite Ooms sightings: bobolinks alighting on sturdy wild grasses and flowers, calling out with a distinctive song once described by naturalist F. Schuyler Mathews as “A mad, reckless song-fantasia, an outbreak of pent-up, irrepressible glee.”

In High Falls, in the village of Philmont, the terrain is completely different: rocky, root-y, and sloping, with a dense cover of trees. The conservation area has 47 acres of hiking trails, including several shorter paths that lead straight to a big payoff: a crashing, 150-foot waterfall, the tallest in Columbia County, on the upper trail and a shorter, even more active waterfall on the lower trail. The falls were created by the construction of a dam and a series of aqueducts, which powered 17 mills during Philmont’s most prosperous period in the early to mid-1800s. It’s a hidden jewel in an unexpected location, and a great stop for picnicking, fishing in the Agawamuck Creek, and birdwatching.

We’ve visited half of the CLC’s conservation areas this year and have enjoyed each of them for different reasons. We’ll hike the other half through the remainder of summer and fall, knowing that whichever park we choose next, we’ll be discovering an entirely new destination, with its own inimitable character, in a region that’s rich in natural surprises.

Click here to visit Robin’s blog, Once More to the Shore.